I vividly remember my reaction to Dr. Samir Husni’s announcement that he was forming the Magazine Innovation Center at Ole Miss University. It was the winter of 2009. The economy was deep into a slump. The smoldering wreckage of Anderson News was still wreaking havoc on newsstand distribution. It seemed like every day there was another article in the industry trades about the death of print magazines. The web was full of snark and Schadenfreude and the Reaper at Magazine Death Pool was getting more coverage than most writers who covered the magazine world.

Dr. Husni had an interesting response to this roiling mess. Thoroughly fed up with the news that another magazine  was shutting down, he announced that he was fighting back. The Magazine Innovation Center at the University of Mississippi was going to be a place where publishers could re-imagine, amplify, clarify and testify to the future of print.

I don’t think anyone would every say that Samir Husni isn’t bold. My reaction that day was a fist pump, and loud “Yes!” that startled the cat.

A year and a half later, after a job transition, several client changes, and more non-stop bad news in the industry trades, I made my way down to Oxford, MS for the very first ACT I conference. Two thoughts crossed my mind as I looked at the agenda during the first full day of the conference:

“I had never attended a publishing conference that wasn’t thoroughly dominated by the largest magazine companies in the industry.”

“I had no idea that so many students still wanted to go into magazine publishing.”

Over the next three days, an Ole Miss student and a young startup publisher and me swapped notes, ideas, advice and hope while we listened to a panel of speakers that included consumer, B2B, custom and foreign publishers. We learned about the potential, promise and pitfalls of digital publishing. We learned that in the world of print publishing, the future didn’t have to be an early grave and a post in the Reaper’s Blog if we were nimble, willing to change, willing to work hard and produce quality publications.

That was the best feature of the conference. Not that the speakers weren’t excellent. They were. Not that the speakers spoke about a diverse series of topics ranging from custom publishing, digital editions, social media and e-commerce. They did. But for the first time in a long time, I was able to interact with the next generation of magazine publishers and it was revitalizing to see how committed they were to their career paths.

Last week I landed in Oxford again for ACT V. ACT stands for “Amplify, Clarify and Testify” and there were surely plenty of speakers who attested to that fact. The keynote address was from Michael Clinton of Hearst who gave a good case for how and why Hearst print magazines and their digital cousins co-exist and mean so much to each other.

But the next day, it was the students who responded enthusiastically to the presentation by Vanessa Bush, the eloquent and engaging editor of Essence Magazine.* Billy Morris, the CEO of Morris Communications connected the dots between magazine publishing and the need for continued journalistic integrity. Greg Sullivan, one of the founders of the successful startup Afar Magazine, kept the audience spellbound with his description of how the magazine got started and all of the other avenues, many digital, that the magazine has taken the publishing company into.

For me the experience was much like going back to college. And sitting next to the schools undergraduate and graduate journalism students reminded of how important it is for our business to recruit the talented, the dedicated, the enthusiastic, the committed. A few snarky comments written by a reporter who’s never spent five minutes understanding the intersection between social media and circulation shouldn’t control the future of magazine publishing. Clearly these kids don’t think so.

If the future of our industry lies in the hands of the four talented, engaging, thoughtful and interesting women and men who joined me for dinner last Thursday night, our business has nothing to fear and nowhere to go but up.

This week, it’s back to work. It’s back to the grind of airlines, presentations, galleys, reports and Account Executives. That’s fine. I’m armed with a bevy of information, hope and excitement for the future.

*Note: Essence Magazine is the creator of the Essence Festival, a live event the magazine hosts each year. The Festival features performers, speakers and a wide range of activities that attracts African American families from all over the country. This year, the event was hosted in New Orleans and attracted over 500,000 participants. That’s larger than ComicCon, Coachella, South By Southwest and Sundance. Considering that this event doesn’t get mainstream media buzz, can anyone wonder or deny the power of branded magazine publishing?

I had planned on banging out a few hundred words at some point in the next few days regarding the recent announcement that a venerable member of the “Seven Sisters” Ladies Home Journal was ending it’s run as a monthly. However, my more immediate concern was what that could do to front end configurations nationwide and how many new “Pay To Stay” check out plan-o-grams I might be called on to consider and pony up for. These are the things that keep me up at night.

Yesterday, after seeing some breathless articles about the LHJ’s relegation to the role of “Book-A-Zine” pop up in my feeds, I posted a rather snarky comment on my Twitter stream and earned a response from Beth Brewster, a lecturer and Director of Studies in the school of Journalism at Kingston University in London. 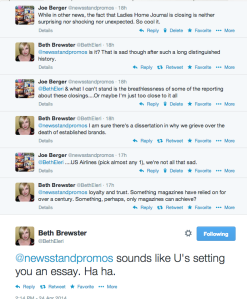 Reflect on that for a moment, please. I just had a “conversation” with a professor in London, England. This is one of the numerous reasons I love Twitter.

Samir Husni, Mr. Magazine, and professor of Journalism at Ole Miss rightly pointed out on his feed:

Changing frequency & adapting a new business plan, is NOT an "end-run." Why do media b2b magazine reporters thrive in spreading "death" news

But I couldn’t have said it any better than the ever enigmatic D. Eadward Tree, proprietor of the Dead Tree Edition blog who’s posting this morning was titled: “Old Ladies Journal Sent to the Home”.  He kicked off his explanation of the events by saying:

I’d invite you to follow the link and read the entire post. He points out that while the transition is a smart thing for Meredith, we do have to consider that people will lose their jobs.

Lastly, it wouldn’t be fair if I didn’t mention that while I was planning on checking out what Mr. Tree had to say, Bo Sacks got there first and included it in his daily e-blast. Along with that link was this thought from Bo himself:

“…the closing of LHJ has nothing to do with gypsy prophesies. It has to do with the nuts and bolts of a vibrant industry which, at worst, is in a transformational stage. Magazines have been born, lived a full life and died multiple thousands of times. It is normal, and what we have always done as an industry. We create, we make revenue and put mercifully to sleep those titles that no longer display the necessary sustainability for a healthy life.”

How can you not like someone who works the phrase “gypsy prophecies” into a column. Check out his entire stream of thought by following this link.

It’s encouraging that after years of living with the endless drumbeat from the fanboys and so-called “futurists” that we’re finally seeing the pragmatists and actual practitioners of this industry: Samir Husni, Mr. Tree and Bo, getting noticed for their push back against the conventional wisdom mongers. I for one, appreciate their ability to explain the life cycle of this industry.

Now if they could only solve the newsstand conundrum.

Here is an article that just might perk up your afternoon.

It got picked up from Mr. Magazine’s (Dr. Samir Husni) Twitter feed this afternoon. The article is from a convenience store news website, CSPnet.com and tells the story of a Boston 7/11 franchisee and the success he has with a 20 foot (yes, that’s correct, twenty feet) mainline magazine rack. Why does he have this success? He pays attention to his customers and he has a distribution clerk who also pays attention.

As I often point out in this blog, this is not a paean to the love of print or a rallying cry to Luddites everywhere to begin smashing iPads (mine is well padded). There is no denying the shift that is happening in reading habits, technological advances and demographic patterns.

But the big issue in newsstand distribution has been, and continues to be, the poor job we do in getting our product to market, merchandising it, marketing it, and calling attention to it. Oh, we’ve got all the basics down OK. Heck, we’ve been doing essentially the same thing since the 1960’s. But we can’t seem to coordinate, upsell or get our mixes right. And I can say that because I just spent an afternoon looking at a regional magazine’s distribution and wondered how I, a national distributor, and four different magazine wholesalers could have missed the gaping holes in this particular title. Could it be we’re all looking somewhere else?

What is worse, whenever we as an industry fail, instead of learning from our mistakes, we continue to make the same ones, all the while apologizing for those mistakes and helping the retailer to cut back on display space.

As an industry we really need to look up from our spreadsheets. At our conferences we need to stop talking about “best practices” while huddling in corners and offering discounts to continue with the same old practices. We need to build a better business model.  We need to talk up our story as an industry instead of looking down at our feet, apologizing and cutting costs and cutting space. If we could do that,  this would be a different kind of industry.

Click on the link below and see if you don’t crack a smile: